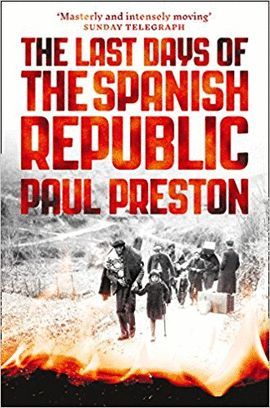 THE LAST DAYS OF THE SPANISH REPUBLIC

Told for the first time in English, Paul Preston's new book tells the story of a preventable tragedy that cost many thousands of lives and ruined tens of thousands more at the end of the Spanish Civil War.

This is the story of an avoidable humanitarian tragedy that cost many thousands of lives and ruined tens of thousands more.

It has many protagonists but centres on three individuals. One, Dr Juan Negrín, the victim of what might be termed a conspiracy of fools, tried to prevent it. Two bore responsibility for what transpired. One of those, Julián Besteiro, was guilty of culpable naïvety. The other, Segismundo Casado behaved with a remarkable combination of cynicism, arrogance and selfishness.

On 5 March 1939, the eternally malcontent Colonel Casado launched a military coup against the government of Juan Negrín. Ironically, he ensured that the end of the Spanish Civil War was almost identical to its beginning. As Mola, Franco and the other conspirators of 1936 had done, Casado led a part of the Republican Army in revolt against the Republican government. He claimed, as they had done, and equally without foundation, that Negrín's government was the puppet of the Communist Party and that a coup was imminent to establish a Communist dictatorship.

Casado's ambition was to go down in history as the man who ended the Spanish Civil War. Instead he ensured the Republic ended in catastrophe and shame as Negrin's attempts to achieve an honourable and negotiated peace with guarantees for the civilian population were thwarted and Franco and his forces wreaked havoc and revenge. Madrid collapsed into civil war and two thousand people died. Refugees fled reprisals in their thousands and those who couldn't escape met a terrible fate.

Paul Preston, the leading historian of 20th century Spain, tells this shocking story for the first time in English. It is a harrowing tale of how the flawed decisions of politicans can lead to tragedy..