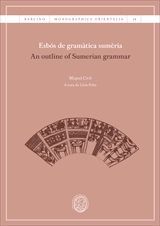 Miquel Civil (Sabadell, 1926 – Chicago, 2019) began writing An outline of Sumerian grammar in Catalan during his stay in Barcelona, and used it in the language classes he gave at the University of Barcelona's Institut del Pròxim Orient Antic during the 2002-2003 academic year. Although unfinished, the resulting volume offers many original contributions, such as Civil's interpretation of the so-called “conjugation prefixes” as an expression of the category of voice, and comprises an effective summary of the eminent linguist's conception of the Sumerian language.